By Christian Paz 6 years ago
Send us your music

Earlier this month, I had a chance to talk with members of the band Crying. In my top 10 albums of 2016 list, I listed their project, Beyond the Fleeting Gales, as my favorite album of the year. So, needless to say, I was pretty excited to do this interview with them!

I want to talk about your recently released album. I listed it as my favorite album of last year, so I’m really excited to hear about the work that went into it. How was the process of changing up your sound so much from your previous releases?

Ryan: Wow, it’s been so long. It’s extra funny because as I’ve been writing now, I find myself wanting to change up the sound even more. In terms of changing from Gameboy to software synthesizers; that was mainly because I was writing a song and had a sound in my head – but that sound couldn’t happen on a Gameboy. So I thought to myself why? Why are we still using Gameboy synthesizers? Why not just go nuts? The original plan was to buy a bunch of synthesizers and just learn how to play them – but that would be insane. Especially because in order to play the Crying synths, you’d have to be classically trained. It’s all done by a computer. Someone with a few months of practicing would not be able to play them.

So how do the synths meld with you and the band during your live performances?

Ryan: All of the most interesting stuff, you can’t see *laughs*. It’s all prerecorded sounds.

You have a lot of rad influences on this album, like 80’s prog rock. Was this a natural transition, going from Gameboy synths to more traditional synths?

Ryan: For me, that’s always wanted to do and I’ve always been making software synthesizer. If a music project of mine had gotten popular before Crying’s previous work, we would instead be talking about “Oh, so when did you switch to Gameboy?”. You see what I’m saying? I always thought that I was going to do a goofy little thing which turned into our first two projects.

Were you guys at all influenced by anime for this album? Listening through some of the songs, I felt like they were inspired by theme songs to my favorite shows.

Elaiza: I think we both like anime, but think that’s separate from this album.

Ryan: I think if the only Japanese artists you listen to are the opening and closing tracks to anime shows, you might listen to our album and go, “Oh it’s anime”. But if you listen to a bunch of Japanese rock or dance music – which isn’t the only thing we listen to – then you don’t think of it as anime music. I think a lot of these Japanese bands tend to jazz it up and be really good with rock and pop. Going along with this idea, I love a lot of library music, like movie production music of the 60’s and the melodies are very similar.

*At this point, Ryan plays me some little melodies on his guitar*

It’s been a while since your album was released. How has your opinion of it changed now that it’s been a few months and you’ve spent time touring it?

How was been playing this album live?

Elaiza: Since our last tour, I think we’ve created our favorite set to date. It’s paced really well and we go through different flavors throughout. It feels really strong and it’s fun to play.

This is pretty off-topic, but I know you guys game so – what’s your favorite video game?

Ryan: Overwatch might be my favorite game. I think it’s actually the best game ever made. Even if I didn’t like it, I think it still would be the best.

Elaiza: The one I’ve played the most is Harry Potter and the Chamber of Secrets on Gameboy Color, but I also have a soft spot for any of the Silent Hills. 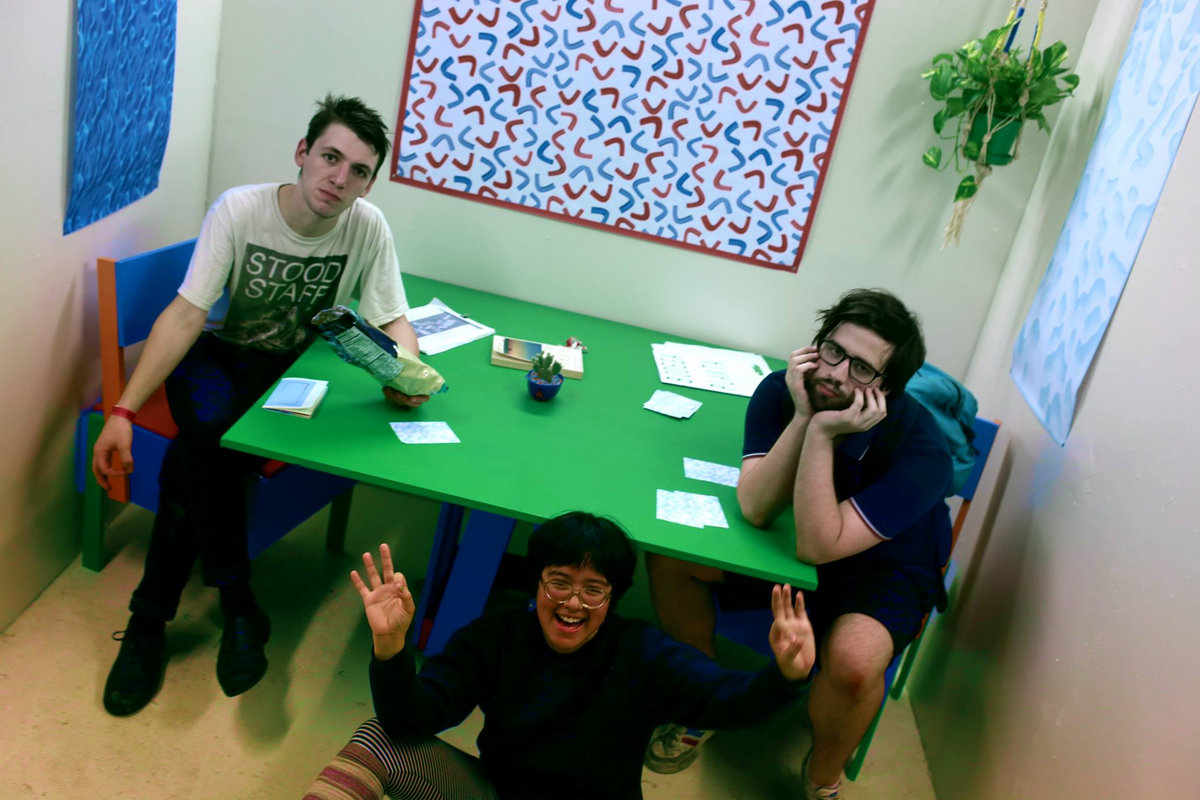 So have you been drumming these guys for a while or just on this tour?

Kynwyn: No, I also joined them for the European tour right before this one. It’s been fantastic. That was the first legit tour I’ve been on. I honestly thought it might be a few years before I’m on a serious tour like this. I’ve been working pretty hard with my other band, Utena, but we haven’t been able to get stuff together as quickly as I’d like. So this tour has been really fun for me!

How was Europe? What was it like touring there?

Ryan: Birmingham was where we made the most money, so that was our favorite stop. That’s it. That was the best one. London was cool too.

Kynwyn: Italy was fun. Germany was ok. The UK had good energy. Germany was alright but once we hit Italy, it kind of brought back the energy that we had at the beginning of the tour. Everyone there seemed super friendly and wanting to party.

Ryan: In the UK, people were a little bit familiar with us, so that was cool. But as soon as we got to mainland Europe the interest in Crying just took a dramatic nosedive.

Elaiza: I think it’s an interesting point that a friend brought up to me – I was very curious to see what the music scenes were like in mainland Europe, especially Germany.

So you guys came into your mainland European tour with the attitude of it being a learning experience?

Elaiza: Yeah, there were a whole new set of challenges because it was a completely different experience.

Ryan: I don’t know, I feel like it wasn’t as much a learning experience as much as we maybe shouldn’t have gone. Crying wasn’t ready. It was weird.

Are you guys still open to the possibility of returning someday? Or are you turned off completely?

Ryan: No, I would want to go back.

Kywyn: I would looove to go back.

Ryan: It was a learning experience in that we learned that no one in Europe cared about us.

Kynwn: Not nobody. There was always that one person!

Elaiza: I feel like there weren’t enough controls to be able to answer “What was Europe like?”. I think we decided to go based upon the fact that it was our best “first opportunity” to go to Europe. Yeah… it was a little big kick in the ass.

Ryan: Well kick in the ass is like getting your stuff into gear. I feel like it was more like a kick to the frontal genital region.

What do you guys usually do if your set is bombing? Do you stick to your guns and play it by the books or do you try to experiment in the hopes that it will lift the crowd?

Elaiza: I don’t think I’m the sort of person that resorts to nervous banter ever. I don’t like small talk and I think it’s really easy to see through that so I don’t bother. But, I at least try to have this standard for myself and for the band to have a good time. For us. Like, practice is fun for us. Hopefully that will make people receive us well.

I definitely feel that crowds can pick up on a band’s energy. It’s easy to tell when a band is having a good time.

Elaiza: I don’t know, it’s easy to conflate having a lot of fun and being real animated. It’s easy to look silly by trying really hard to change what you’re doing every second in order to get a rouse out of the audience. Eh, it’s a case by case thing though. I just make sure that the experience is fun for me and for these people – I perform for Ryan, Kynwyn and myself. Then I hope that everyone else likes it. But if they’re gonna stand there I’m still going to dance, you know?

Ryan: I think my reaction to crowds that aren’t receiving us the way we would love to be received is twofold: One way, I think to myself, “Ok, these people definitely don’t like us”, I’m just going to play the set and step off. The other way, I can see potential in the group of people before us. I see it as a room full of people, “Let’s rock out!”. I think of it as an opportunity to win as many over as possible.

How do you guys perform when the audience is really responsive to your set?

Elaiza: Maybe there’s a standard for being good, like if the audience is feeling it, we get… kind of funny.

Ryan: You can always tell. Oh my god. There’s this: *Swings his guitar over his head and points the neck straight upwards*.

Kynwyn: I always find the person who's been looking at me and then stare back at them awkwardly. I like seeing the drummers in the crowd, who are into drums and what I’m doing. I’m just naturally a pretty awkward person so I’ve kind of learned to embrace it. I feel like in general I want to look at [Elaiza and Ryan] more but I feel like I’m looking at them and they’re looking away and vica versa.

Ryan: Whenever you look at a bandmate on stage, you make the decision to connect with them. Whenever I look up from my guitar and both Elaiza and Kynwyn are looking away, I feel like they don’t like me.

By Brian Earls 6 years ago

20. Brasstracks - Say U Won't   What a year Brasstracks has had. The Brooklyn duo has helped produce songs for Anderson Paak and Chance the Rapper on their 2016 albums, in addition to creating their own album. After listening to "Say U Won't", it's easy to see why... Read More

I had the opportunity to sit down and talk to Austin Basham, a folk singer hailing from Austin, TX. We've featured Austin's music before and I was delighted to catch him while on his first ever European tour. Here's what we talked about:    So I know you’ve been in... Read More